... OR A TRAVEL TO THE CRAZIEST HOTEL ROOMS IN THE WORLD.

In this book you will find a mix of the most unusual places to stay around the world, from cheap hostels to the highest quality hotels. Depending on your budget, you will quickly find the right accommodation, the rooms are marked with € – €€€ .

The hotels and hostels were chosenindependently and free. It´s no payed advertisement. 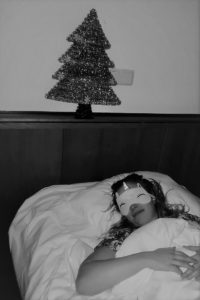 Why did I wrote this book?

When I was studying in Genova (Italy) for half a year in 2017, I traveled through the country of Pizza & Amore and stayed in a hostel for the first time.

I was surprised. There was no mass murderer hiding in my room, but really funny bed neighbors. I was actually able to sleep after trudging to reception in my pajamas at night and then putting the earplugs in my ears. I had met great people and our room went on a sightseeing tour the next day. From then on, I decided to only stay in hostels when traveling.

Don´t you have friends?

Organizing a trip with several people is sometimes more difficult than rubbing cream on your own back. Then come exams, saving for the next vacation with your sweetheart, lack of time or a burst pair of jeans in between.

When I arrived back in Germany, I decided to write a book about the coolest and most bizarre hostels. I sent homing pigeons to everyone I had met before on my travels (I wish they were Instagram messages) and went looking for them myself.

The publishing company Dumont was convinced of my idea and so I startet writing this book.

Just try it if you have an idea in your head!

Really, it can be that easy! If you like tips want to know how to write to a publisher or structure your book, please write to me!

Two of my favorite accommodations that unfortunately didn't make it into the book:

The Plus Florence Hostel in Italy (with roof terrace and pool) & the one room hotel Nada Nada in Portugal. The Nada Nada came in my next book “I did it my wave!”.

Vinaigrette in the making. Maybe soon there will be cocktails too ! . . . Oh yes, not only we are hosting guests to stay now, but we will cook for you too. Check out the beautiful blog post did by @tasteofportugal.eu about one of the lunch we did recently 👉🏻link in bio #thisisnadanada #cook #cooking #cookinglife #bar #barbar #privatelunch #privatedinner #homestylecooking #fusion #notparisienne #guesthouse #bnb #porto #portugal

Even if everything is not always so rosy in a hostel, but sometimes rather rust-colored... at home you definitely have something to tell!

If you have travelled to Australia then you know 😂